The Innovation Radar of the European Union has shortlisted the key innovations developed by Pal Robotics throughout the participation in different EU-funded projects. Part 1 provides more information about our advancements in the Healthcare sector. The rest of the recognized developments by the Innovation Radar are focused on collaboration, both, between platforms and human-robot interaction :

Collaborative mobile manipulator robots are pushed by the EU-funded project Co4Robots to become a reality and transform the factory of the future.  Co4Robots’ purpose is to create a multi-robot system that is able to interconnect and control diverse robots in an environment that is constantly changing.

The focus is put on decentralizing the control and coordination of heterogeneous robots that should interact between them and with humans. The European Union’s Innovation Radar highlights the development of force torque tuning and calibration, a feature that is imperative for robots to safely interact and collaborate with people. 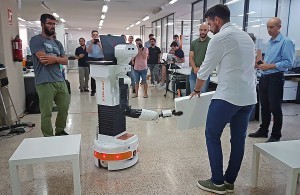 The idea of the project is to improve social competences of robots by understanding the mechanism of human social interaction and cognition. Consequently, to apply these insights for improving the condition of people with disturbances of social cognition.

The main contribution of PAL Robotics was the augmentation of our REEM-C  biped robot.

In 2020 Pal Robotics is even more engaged with new projects and developments  that are used in various areas such as healthcare, industry, AI, Human-Robot Interaction, Smart Cities and much more.

Check out all the projects PAL Robotics is involved in at our Research page! And find all the Innovation Radar identified breakthroughs at their interactive map.