Skip to content
← How TIAGo robot benefits from Deep Learning
Creating the first benchmarking for humanoids: EUROBENCH seeks for partners!  →

After heading the overall classification of the RoboCup German Open, Homer Team (Koblenz University) achieved the top of the RoboCup@Home Open Platform League (OPL) Competition, which took place in Montreal (Canada). A lot of time invested in preparing the Open Challenge and Finals paid off with such major success, competing with the best teams from all over the world and leading the classification from the very first day. Of course, the path wasn’t easy: here are their impressions on the experience!

Robots storing groceries and serving at a restaurant 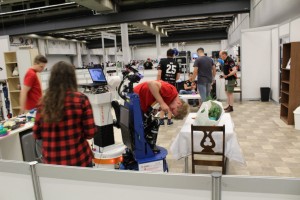 Homer Team counted on two robots on board for the RoboCup@Home tests: a PAL Robotics’ TIAGo and a custom-made Lisa. The team leader, Raphael Memmesheimer, is very happy with their performance: “Lisa did a very good job serving in an unknown restaurant drinks and food to unknown people. And TIAGo did a great job in the finals imitating behavior that Lisa observed with hard to grasp objects like a fork or knife.”

The Storing Groceries Task was one of the big challenges they encountered, for which they used TIAGo, because “he is so much more reliable than our custom robot in manipulation centric tasks”, says Memmesheimer. This task consisted of storing groceries from a table into the correct position inside a cupboard and placed according to the type of product. “The cupboard was closed in the beginning. To make it even more complex there were also unknown objects which should be stored correctly”, he explains.

The Dishwasher Test was another achievement: “The robot was supposed to clean a table and store cutlery and dishes safely in a dishwasher. TIAGo is perfect for a task like this because of his flexibility through the 7 DOF arm and the linear torso”, shared the team leader. For the finals, they used both TIAGo and Lisa robots for a Markerless Visual Programming by Demonstration:

In this video we demonstrate how to program a robot just by visual observation. No sensors where attached to the demonstrator. We observe spatial relations between a humans hand and the interacting objects. Sets of fundamental conditions describe the actions. The observed actions are also transfered to PAL Robotics TIAGo robot, which then is able to execute the command as well. Our approach not only recognizes the class but also the interacting objects and locations which therefore can be exchanged when repeating the command later on, i.e. by a speech command as demonstrated. A paper describing the approach is currently under review. Further we demonstrate an torque controlled approach for picking up hard to grasp objects like the cutlery in this case.Music:Karstenholymoly – Perpetuum Mobile

Counting on a passionate team and the right robots

One of the highlights they point out to succeed is a to be in a talented team that is passionate about robotics. “Each team member needs to invest a huge amount of time and like for most professional sports teams they must be motivational driven”, states Memmesheimer (Read more about Homer Team and the importance of robotic competitions here!).

Another part of the success is having a robot that is “a domestic all-rounder”, as Memmesheimer qualifies it: “Nowadays your robot needs to be able to combine all skills at once in an integrated manner. That means person detection/recognition/tracking, object detection/recognition, speech recognition/understanding, navigation and mapping even in unknown environments and of course manipulation of objects. The top teams develop or integrate approaches based on the current state of the art approaches in the computer vision and robotics research community.

After RoboCup@Home: The next challenges with TIAGo

Homer Team’s calendar goes on after winning RoboCup@Home! The upcoming competitions are coming soon, and they are getting TIAGo ready for that. One of them is the IROS Mobile Manipulation Hackathon (Madrid), and another one is the World Robot Summit (Japan).

Thank you Homer Team for sharing your experience with us at RoboCup@Home, and best of luck with the upcoming competitions!