Skip to content
← Understanding the future of robotics at the ERW2018 Central Event in Augbsurg
See you at ICT 2018 in Vienna!  →

TALOS: The Robot of the Week at the IEEE Robots Guide!

PAL Robotics’ humanoid TALOS is the “Robot of the Week” at the IEEE Robots Guide! IEEE Spectrum, the award-winning technology magazine, has recently launched this new site to become a helpful tool for discovering nowadays robots and their applications.

The high-performance robot TALOS is featured at the IEEE Robots Guide homepage, which highlights some of its most relevant capabilities: torque-controlled locomotion and balancing, powerful sensing, and advanced manipulation skills. TALOS’ page at the Guide summarizes its main technical specifications, from its 6 Kg payload to its EtherCAT communications bus. You can also find some curious facts around the robot, like its name’s origin, or how it relates to the NASA’s Space Robotics Challenge. 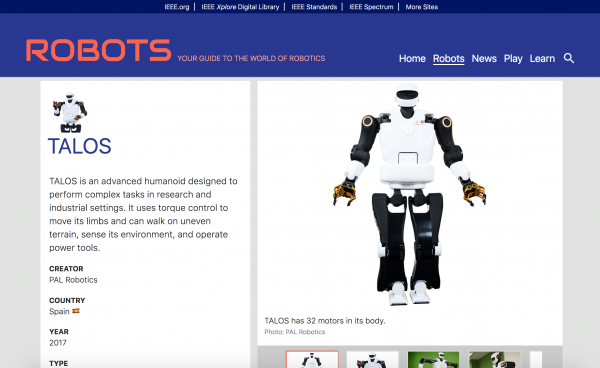 The IEEE Robots Guide explores the fascinating universe of robotics in a fun and engaging way and has over 200 robots from 19 countries, including humanoids (REEM-C and TIAGo are there too!), androids, drones, self-driving cars, and much more. The site also gathers the most recent news on the robotics sector – like the one of TIAGo robot learning to clean the bathroom.

The site has been created in a moment when we can already picture how robots will have an impact in every part of our lives, so it is more important than ever to have a reference resource as such. Another goal is getting more students interested in STEM (Science, Technology, Engineering, and Math), and nurturing the next generation of robotics engineers.

Check out TALOS, REEM-C and TIAGo pages! You can rate them and help them climb to the top of the Robot Rankings. There are three categories you can vote: the Top Rated, the Cutest/Creepiest and the Most Wanted.

We love that such an initiative has been pushed from IEEE Spectrum, and encourage the team to keep up with such awesome project! Go ROBOTS!