This year’s RO-MAN event (the 29th RO-MAN!) was as diverse and interactive as ever, despite taking place virtually, with presentations, workshops, Q&A sessions, live demos and more. The PAL Robotics team were delighted to participate once again, and joined workshops on themes including socially assistive robotics, HRI, interaction and learning, and robot manipulation to give talks and present research papers.

RO-MAN’s event theme this year was, Robots with Heart, Mind, and Soul – referring to the interaction of Artificial Intelligence and Robotics which is leading the Robot and Human Interactive Communication community towards new frontiers where perceptual, reasoning, manipulation, and interaction capabilities are effectively deployed in real world applications.

HOBI, the workshop on “Hand-OBject Interaction: From human demonstrations to robot manipulation” included a talk by Dr. Guillem Alenyà and Dr. Julia Borras on “Learning grasping for manipulation of rigids and clothing”. In this project they have developed methods to learn grasping actions and during the live demonstration two TIAGo robots were used to set up a tablecloth, fold a towel and help with dressing. 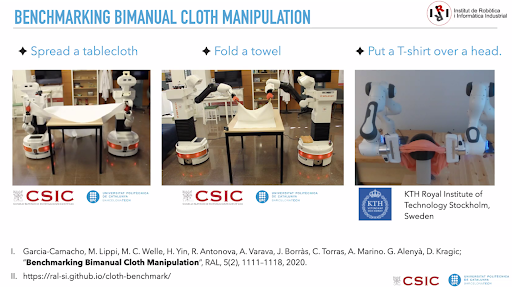 Elisa Maiettini and Baptiste Busch also spoke at this workshop on “On-the-fly learning from a human demonstrator: experiments with a humanoid robot” and “Towards more fluid in-hand manipulation” respectively. Luca Lach, PAL Robotics’ Software Developer and PhD student joined this workshop to talk about a paper he co-wrote, “Leveraging Touch Sensors to Improve Mobile Manipulation.” The paper presents novel, tactile-equipped end-effectors for the service robot TIAGo that are currently being developed.

We particularly enjoyed the presentation by Mohsen Kaboli in this workshop on “The importance of the sense of touch in Human-Robot/Vehicle Interaction.” During the workshop our Robotics Engineer, Dr. Alessandro Di Fava also gave a talk “Towards Real-World Scenarios: Perception Enhancements and Emotional Expressions in Social Robots,” and how the audio and expressions components in ARI can boost expressiveness and user engagement.

Finally, PAL Robotics’ paper on “ARI: the social assistive robot and companion” was submitted for this event, by our team members; Sara Cooper, Dr. Alessandro Di Fava, Carlos Vivas, Luca Marchionni and Francesco Ferro. At the virtual event, Sara Cooper, hosted a Q&A session on the paper, focusing on a review of healthcare robots, in particular socially assistive robots, and PAL Robotics new ARI robot’s potential to fulfil some of the user-cases in demand, as well as sharing some live demos of ARI in the session.

The history of RO-MAN events

The annual RO-MAN conference, organised by the IEEE (The Institute of Electrical and Electronics Engineers) is a forum where state-of-the-art results, the latest developments as well as future perspectives relating to robot and human interactive communication are presented and discussed.

PAL Robotics would like to thank RO-MAN, and the IEEE for their work in making this virtual event a success. Find more information about upcoming virtual events that PAL Robotics is attending by visiting our website, and learn more about our robots ARI and TIAGo. If you have any questions, do not hesitate to get in touch with us