Skip to content
← Unprecedented stock control by merging RFID and vision into StockBot
TIAGo spotted at the Joint UAE Symposium on Social Robotics!  →

The European Robotics League (ERL) Season is about to finish! Two Service Robotics tournaments were the last opportunity for teams to improve their positions in the global classification, which will be announced in the European Robotics Forum. Lots of TIAGos were seen in the last tournaments of this season, which were held in León (Spain) and Edinburgh (UK) on the last week of January. Three teams shared with us their experiences, challenges and sensations there! 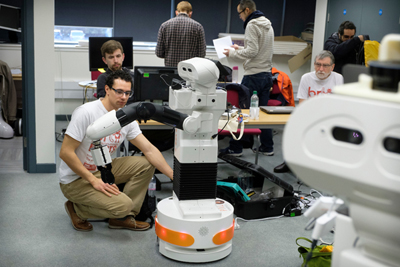 HEARTS Team participated in almost all tests in Edinburgh SR Tournament, adding two new benchmarks. “One breakthrough we had was in our person tracking algorithm. It had been a little flaky in testing but we made many improvements during the competition and were able to achieve good performance by the end”, team points out.

Navigation tests were the focus of Robotics Lab UC3M Team in León, and were fairly satisfied with their final scores. “Participating in tournaments like this helps a lot in defining goals and improving the work capacity when solving unexpected problems along the tournament, in real situations”, they highlight.

IRI@ERL Team set two goals for Edinburgh: improve object detection algorithms, and be capable of grasping objects. It was ambitious and they faced problems, but are happy with the outcome: “As the saying goes: nothing ventured, nothing gained! At the same time, we greatly improved objects detection and position calculation. Thanks to this we could do object manipulation, automatized and avoiding obstacles. A major success given the little time our team had for preparation”, team says.

Enjoyable, intense and challenging: this is how teams mostly describe ERL. An example of this is the HEARTS performance in Edinburgh: “We’d been a little overambitious in our objective to compete in two new benchmarks and arrived under-prepared. We worked extremely hard over the week to improve our performance, achieving good scores in both benchmarks by the end of the competition.”

In this direction, Robotics Lab UC3M Team shares: “The experience was certainly positive, because ERL reflects the efforts made in the laboratory to prepare for the competition. Since the tournament is part of a League, the mere fact of participating is already a challenge to improve the programming needed in order to successfully perform the tests”.

“One of the greatest ERL SR virtues is the healthy competition that is generated between all teams. There’s enough communication to learn how each team faces the same problem and in this way, we can all improve algorithms for future tests”, spotlights IRI@ERL Team.

An ERL full of TIAGos! 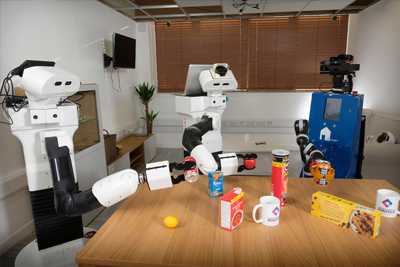 The three teams had a TIAGo as a team member, and all agree in standing out its robustness and reliability both in hardware and software. Robotics Lab UC3M explains that due to TIAGo’s good behaviour, they could focus on developing high level functionalities for it. “We have to point out the navigation system implemented in the robot, very efficient in varying environments, as we could verify”, they stressed.

“TIAGo has proven to be an ideal platform for both assistential and service robotics. Its dimensions and manoeuvrability are excellent to navigate in domestic environments, as we experienced in the diverse testbeds”, told us IRI@ERL Team. They also liked its large workspace, “provided by TIAGo’s arm position and lifting torso, which makes it easy to manipulate objects in diverse heights.”

Congratulations to all teams! We look forward to seeing you all at the final classification announcement at the European Robotics Forum, in Tampere (Finland)!